Create an Account - Increase your productivity, customize your experience, and engage in information you care about.

Austin Hall, the oldest building on the campus of Sam Houston State University, was designed in the Greek Revival style in 1852. Situated on top of the site once known as "Capitol Hill," the two-story, red-orange colored brick building with large white Tuscan columns and onion domed cupola is the anchor building at the north end of the campus quad in the historic heart of the campus. Located at 1741 University Avenue, Austin Hall has two equally important elevations, one facing 17th Street to the north and the other facing the campus quad to the south; both serve as main entrances to the building, although the north entrance is the original. Austin Hall has been remodeled and then restored several times throughout history, but today appears very similar to when it was completed by Huntsville builder W.M. Barrett in 1853. One of the most interesting architectural features has developed over time as students have carved their names into the soft molded bricks on the lower six feet of the building. The 80' x 50' rectangular plan has two 42' x 12' rectangular porches on each of the long elevations facing north and south. Four double-height Tuscan columns finished with Portland cement plaster support the porch roofs. Each elevation is lined with tall nine over nine lite double hung wood windows. The three wood doors on the exterior have transom windows once used to ventilate the schoolrooms. The entire building, including the porches, is capped with a large wood cornice with simple detailing. A 22' tall octagon shaped cupola clad with wood siding and four pointed arch openings facing the cardinal directions sits in the center of the flat-seam, hipped metal roof. The cupola is topped with a metal onion dome with a ball and spire finial.

Austin Hall was the first building constructed on the site once known as "Capitol Hill," which overlooks the city of Huntsville and the surrounding countryside. It stood alone on the hilltop until September 1888 when construction began on a Gothic Revival building known as "Old Main" a few feet to the north. In 1982, Old Main burned to the ground, severely damaging Austin Hall and prompting a major restoration. Old Main was not reconstructed, but portions of the foundation walls were developed into a memorial garden and today, in 2012, the north facade of Austin Hall is once again visible from a great distance. 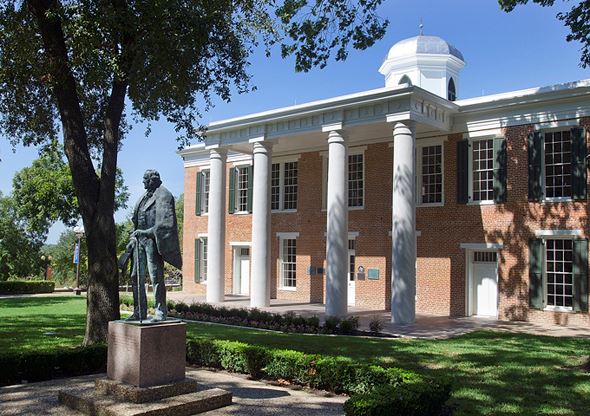 Built by Sam Houston in 1847, "Woodland'' was occupied by him and his wife until 1859 when he was deposed as Governor of the State of Texas. Houston exchanged part of his property at Raven Hill for "Woodland" which, in 1847, was no more than a small log cabin with a chimney of mud and sticks. That year Houston added an open hallway and a second log room to the end of the hallway or "dog-trot." A porch was built across the front. Above the two front rooms was a loft , probably for the house servants until the quarters were finished. Plank doors and flat nails detailed the Houston House at firs t but later siding was added. Painted white today, originally the weatherboarding was probably whitewashed. The house was further enlarged the following spring. The loft was converted into two bedrooms separated by a grille d breezeway. A steep enclosed staircase was added from the lower to the upper hallway. At this time the front seems to have become the back: two windowless rooms were partitioned at opposite ends of the garden porch, leaving between them a loggia for summer dining. The open back of the hall was embellished by the addition of a pediment and portico of four square columns. Two one-room, gabled, square log outbuildings stand on the grounds. One, a kitchen, is a reconstruction; the other, merely restored, served as Houston's law office . "Woodlands" is owned by the State of Texas and open to the public.

Click here for more information on the Woodlands Home 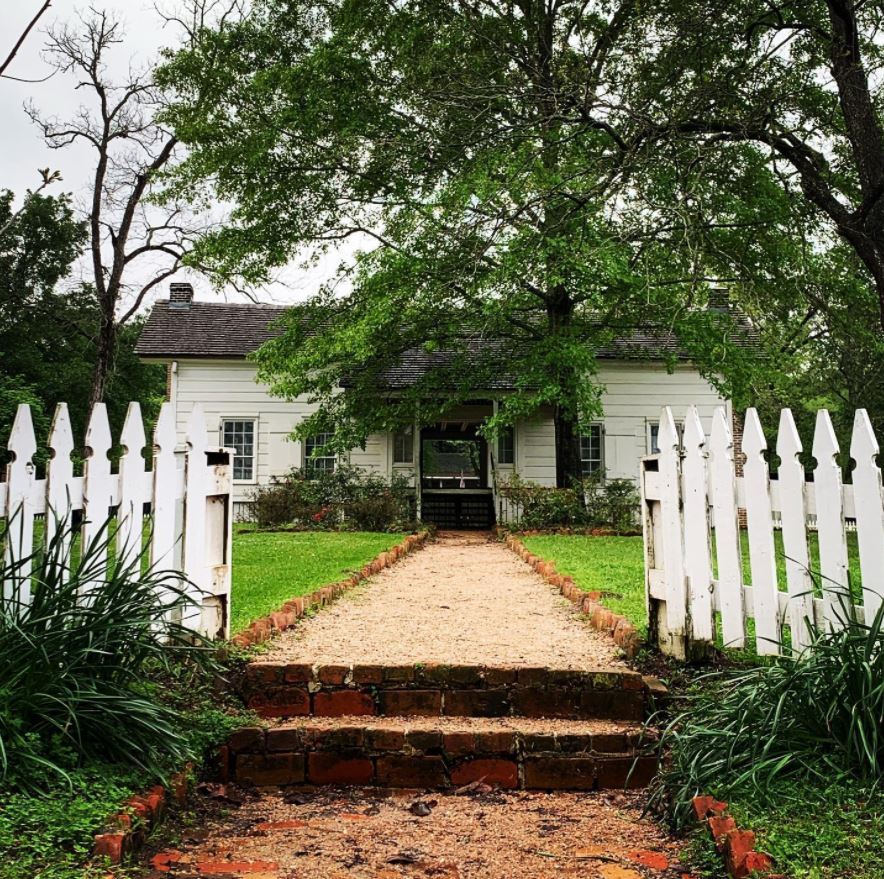 Josey Scout Lodge is hosting a Celebration and Open House on November 7, 2021 at 2:00 PM in recognition of Josey Lodge and its Caretaker’s Cabin being listed on the National Register of Historic Places. Both buildings are also designated Texas Historic Landmarks.

Josey Lodge was built and dedicated in 1934. Mr. Robert A. Josey conceived of the idea and donated the equivalent of more than $90,000 toward its construction; Gibbs Bros. & Company donated the logs, rocks, and petrified wood; and Roosevelt's Civil Works Administration provided the labor. The Lodge boasts 4,270 square feet in five rooms, plus about 900 square feet of basement storage space. The large auditorium and both small meeting rooms include stone fireplaces with hearths and mantles of petrified wood.

The dedication ceremony held in June 1934 was attended by more than 1,000 people including such dignitaries as Texas Governor William P. Hobby. In his dedication address, Mr. Josey stated “I ask you to join with me in dedicating this lodge to Service. Be careful of what you do, be just in what you say, be earnest in what you undertake, be strong to finish what you start, and above all, be sure that these things will help others.”

Josey Scout Lodge, the Caretaker’s Cabin, and the Girl Scout House are owned and operated by the nonprofit Robert A. Josey Lodge, Inc.  The nine-member Board of Trustees strives to protect and improve the existing facilities and ensure their availability for the future; preserve the heritage of Huntsville Scouting and Josey Lodge; provide service and support to local Scout units and the larger Scouting community; and grow the Scouting movement.

The public is invited to join us on Sunday, November 7, 2021, 2:00 PM at Josey Scout Lodge, 1211 22nd Street at Sam Houston Avenue, for a brief ceremony followed by a reception and open house to honor the legacy of this historic building that has touched so many in our community for the past 87 years.

Click here for more information on the Robert A. Josey Scout Lodge 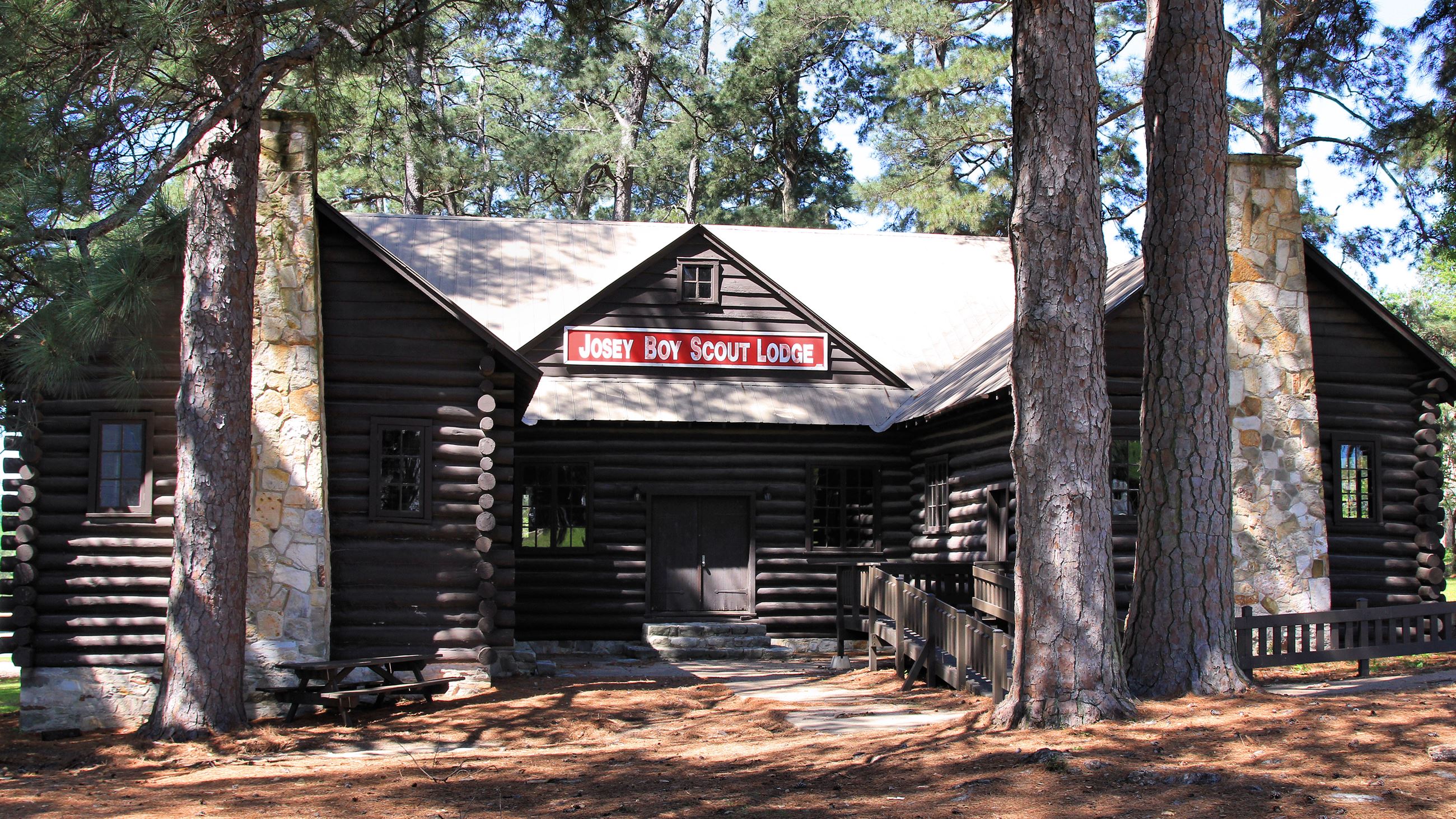 John William Thomason, Jr. was a graduate of Sam Houston Normal Institute and an officer of the US Marine Corps. He began his military career in World War I, earning a Navy Cross (1918), Silver Star (1918) and Purple Heart for actions on the French battlefield.

A noted author and artist, Thomason wrote eleven illustrated books, among them Fix Bayonets (1926), Gone to Texas (1937), and Lone Star Preacher (1941). Many of his articles, short stories, and books dealt with the military life, drawn on from experience in the Marines, or tales about his native Texas.

Due to medical reasons, Thomason was kept away from the front lines during World War II but toured South and Central America. After stints at the Army and Navy War colleges he was promoted to colonel, but succumbed to his illnesses in a few short years.

The house where Thomason was born and raised still stands in Huntsville at 1207 Avenue J. Constructed between 1891 and 1910, the house and office were originally owned by his father, Dr. John W. Thomason, Sr., a local physician and civic leader.